NEW YORK – As an industry in major flux, there are no rules anymore in fashion retail, leaving brands to define for themselves what reaching their consumer looks and feels like for their businesses. For so many, supporting bottom lines means heaping resources into creating robust omnichannel pathways and redefining the traditional wholesale/retail model. Those who are building physical spaces for shopping are doing so with great care towards what that investment means for their larger brand and sales strategy.

For 160-year-old British brand, Hunter, creating a physical retail presence is only a sliver of the broader brand strategy, and instead, the company known for their rubber Wellington boots is opting for deep and aligned experiential marketing to share their brand story and connect with their consumer.

“We need to find as many opportunities to deliver a brand experience as we can,” says Hunter’s Creative Director, Alasdhair Willis, during an interview in New York. “And that is hard to do through just retail partners.”

Historically, Hunter has been a wholesale-only brand, with only two stores in the world (a third is set to open in Toronto later this year). Famous for their boots worn by everyone from Kate Moss to The Queen of England, Hunter is committed to finding inventive ways to penetrate various consumer segments in hopes to increase their brand presence in new markets.

“We don’t want to rely on wholesalers anymore, and department stores here are taking major hits. While we want to partner with retailers, we also need to make sure our brand is communicating outside of those partnerships,” he says. “We place a high-level of importance on retail, no question, but we don’t see ourselves having 200 stores around the world.”

In two recent experiential events in New York—one, designed to create mass awareness within one target, and a second to create deep penetration within another—Willis’ focus was to create experiences to help the company achieve greater awareness in the US market.

The first experience took an intimate group of tastemakers for a private lunch with Chef Dan Barber, the man behind the Michelin-starred Blue Hill Restaurant at Stone Barns, ranked as the 11th best restaurant in the world. Blue Hill at Stone Barns is the center of a fully functional farm where Barber is leading the development of agriculture and animal products with innovation, flavor and ethics in mind. In this farm-setting, guests were invited to experience the Hunter Field line of technical boots as they dined with the chef and toured the farm grounds.

The alignment made sense. Hunter has always been pegged to rural environments and the outdoors, yet there is a sense of quality, and even rustic luxury, that was a seamless alignment with Blue Hill, which for all its creativity and fanfare is, after all, a farm. It also happens to be the location where Hunter’s next campaign was shot. 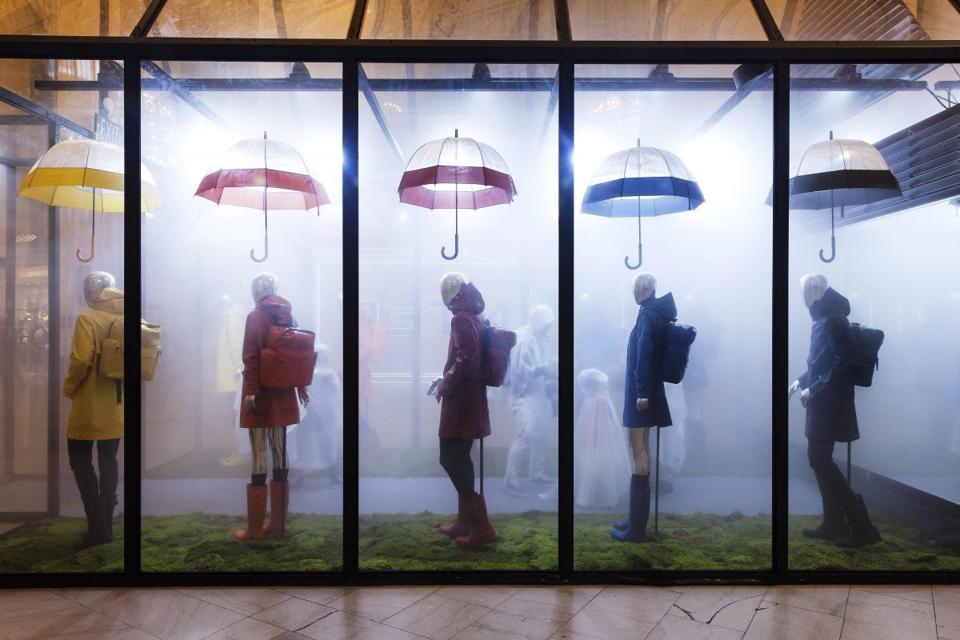 Experiences like these are not new in fashion, companies are continually having glitzy and glam affairs or product launches that are great for buzz, although often times, lack any real alignment. The clever thing about the Blue Hill at Stone Barns experience is that the alignment was smart, well-conceived and made perfect sense for the brand.

“Blue Hill represents the behavioral pattern and the lifestyle of that particular audience for Hunter Field,” says Willis.

The second experience, only just a few days after the Blue Hill excursion, targeted a broader audience whereby the brand recreated the misty Scottish highlands in the middle of New York’s frenetic Grand Central Station.

With more of a focus on fashion and style and categories such as rain gear, a contemporary-styled, glass greenhouse inspired structure was placed in the station’s Vanderbilt Hall and filled with mist, moss and Hunter product. Replete with a soundtrack on loop simulating the sounds of the countryside, subsequently draining out outside noise, the result was an immersive moment that took people out of Grand Central Station and into the world of Hunter.

“The outcome for both is clearly that we want to see different consumers engaging with different parts of the brand,” says Willis. “Yes, we will take sales and capture data [at Grand Central], but really, the social [media] attraction around this is powerful. It's the first time we’ve activated the two sides of the brand in such a short space of time, and there is learning to be taken from that.”

Willis, the former Publisher of Wallpaper* who in addition to his role at Hunter heads his own creative agency, has a strong point of view on the creative process in today's data-driven world. While he thinks analytics are exciting, full of relevant and useful information, he believes brands are relying too much on them, which is stifling the process for many creatives.

"There is a danger that we are ending up with a fairly sterile and overly pragmatic approach to creative with this overdependency on analytics," he says. "Creatives at the top should be able to allow themselves to have something of a vacuum to create, and that vacuum is getting less and less and less. I think we need to actively make sure that businesses try to drive the opportunities for that vacuum." Which is why Willis physically removes himself from meetings where he knows he will spend hours trawling through data and will often go to the country to work without distraction.

In the last few years during which Willis has worked to bolster Hunter's digital omnichannel presence, their online sales have grown to encompass 27% of the brand's business through a strategy that supports retail with a meaningful digital presence layered with experiential moments.

“The important thing to me is that we demonstrate to our consumers, the press, and the industry the breadth of the Hunter proposition," he adds. "I want to give a rounded experience of all the aspects of the brand.”